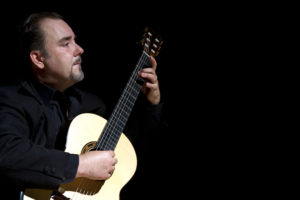 Classical guitarist Patrick Kearney represents a rare balance between sheer technical virtuosity and intense musicality. A true artist, he consistently spellbinds audiences through his deep musical insight and natural dramatic flair, interspersing his performances with narration and anecdotes discovered through deliberate research into the guitar repertoire.

Born in Montreal, Canada, Patrick Kearney discovered the classical guitar early on in life. Having won his first national competition in Ottawa at the age of ten, he pursued his studies first under Daniel Boyer and then with Jacques Joubert at Vanier College. Convinced that music was his true calling, Patrick went on to complete his Superior Diploma in Performance at the École Normale de Musique de Paris, where he received the highest honours under the direction of Rafaël Andia and Alberto Ponce.

Upon his return from France in 1993, Patrick began his professional career as an international competitor and touring artist, winning top prizes in several international competitions. Patrick has performed in concert and conducted master classes on numerous tours throughout Europe, the United States, Mexico, and Canada. He has appeared as a soloist with several orchestras, including the Orchestre Philharmonique de l’Îsle, the Shenandoah University Orchestra, Montreal’s I Musici, and the Ensemble Appassionata. In 1997 he completes his Master’s Degree under the guidance of Peter McCutcheon.

Never content to remain confined within the standard guitar repertoire, Patrick has taken steps to contribute significantly to the world of art music. He has commissioned and premiered several works by contemporary composers such as Andrew Zohn, Atanas Ourkouzounov, Jay Kauffman, Ginette Bellevance, and Robert F. Jones, and has inspired composers such as Daniel Boyer and Claude Engel to create and dedicate new works to him.

Patrick Kearney has released four guitar albums: Bouquet (1997); Stringendo (2002), which is a tribute to contemporary Montreal-related composers and was nominated for the prestigious OPUS Prize; the powerful Diabolico (2004), in which the listener follows a musical timeline between ambitious youth and understated maturity; and recently the acclaimed Impressions (2009), featuring the works of M.M.Ponce, on the ATMA classique label.

Mr. Kearney teaches guitar at Concordia University in Montreal as well as at Vanier College. He is the founder and director of the Montreal International Classical Guitar Festival and Competition (www.guitaremontreal.com), which is hosted by Concordia Music.