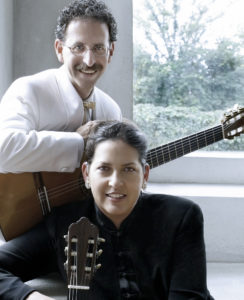 Hailed as a “revelation to hear” by The Washington Post and celebrating their 40th anniversary season, the Newman & Oltman Guitar Duo perform a broad range of repertoire that spans Renaissance duets through commissions from today’s top composers.  Their innovative programming, matchless technique and ensemble precision, combined with their commitment to expanding the repertoire for guitar duo, make Newman & Oltman a widely recognized and influential ensemble both in the US and abroad.  In addition to their phenomenal musicianship, they are dedicated to inspiring the next generation of guitar players through their many educational endeavors.

Recent premieres include Concierto Buenos Aires, composed for them by Nuevo Tango Master Daniel Binelli, with the l’Orchestre de l’Opéra de Reims in France and with the Virginia Symphony. International engagements included performances and lectures at festivals in Curitiba (Brazil), Iserlohn (Germany), Alessandria, Lanciano, and Volterra (Italy).  The Duo will continue serving as co-artistic directors of the Lanciano International Guitar Seminar in 2017.

Champions of new music, Newman & Oltman have built a unique repertoire of works for two guitars by leading and emerging composers such as Paul Moravec, Augusta Read Thomas, Lowell Liebermann, Dušan Bogdanović, Arthur Kampela, and Roberto Sierra.  Plans for future commissions include a new work by Leo Brouwer dedicated to the Duo.

Their artistry has also been captured on a dozen critically acclaimed recordings. Fanfare Magazine hailed the Duo’s CD, Music from Raritan River as “top notch” and “a winner all around.”  “A reference standard” (Billboard), “Their duet recordings reveal a finely blended sound and true unity of timbre and style” (The New York Times), “…beautifully realized performances” (Guitar Player Magazine).

Newman & Oltman’s contributions to the world of music have been recognized by grants and awards from the National Endowment for the Arts, Chamber Music America, and other national and international organizations, including an ASCAP Award for Adventurous Programming.

The Duo has served as Ensemble-in-Residence at New York’s Mannes College since 1987. Michael and Laura are founders and artistic directors of the New York Guitar Seminar at Mannes, the Lanciano International Guitar Seminar in Italy and Raritan River Concerts and Raritan River Music Festival, which celebrates its 28th year this season.  Keith Calmes (Seen and Heard International) wrote “Newman & Oltman should be commended for their enduring festival, stellar students, dedication to contemporary works and sheer artistic greatness.”

Drawing upon their artistic and creative experiences, Newman & Oltman have designed an entrepreneurial program offering marketing advice and practical tools on ways to compete and succeed in an ever-changing marketplace.  They have been invited to a number of educational institutions to present their vision which engages the participants in the discussion.