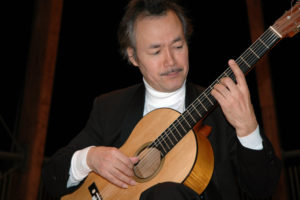 First prize at the Japanease Broadcast Competition NHK at 1969

From 1974 till 1980 Lecturer at the Musikhochschule Aachen in Germany.

More than 1200 Concerts and 18 CDs, DVDs in Solo Performance and in Ensemble with Solists of Stuttgarter Kammerorchester in Trio Matiegka and with world famous Flutist, Peter Lukas Graf, also with Czech Virtuosi in Europe and North – South America and Asia.

Since 2005 Member of the board of directors of Hermann Hauser Guitar Foundation.

Since 2007 Artistic Director of International guitar competition J.S. Bach in Germany and Japan.