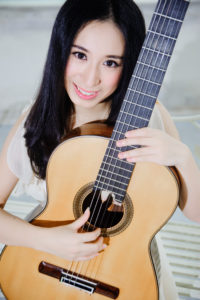 The Chinese classical guitar player Manni Wu was born in May 4th 1992. She started playing the guitar at the age of 7 under the instruction of her father. In 2010 she entered the classical guitar program at the Xinghai Conservatory of Music in Guangzhou where she studies with Prof. Bastian Hildner from Germany.

On June 20,2017  she finished the Master Degree with the highest marks.She’s now continuing Concert Exam in the same school. During her studies at the Conservatory she won several prizes at the most important national guitar competitions all around china,even some international competitions and also got some experience about the performance:

In December 2013,she was invited as a guest guitarist of the Guangzhou Contemporary Art Ceremony.

In April 2014,she performed 4 concerts for the “Night of Guitar”solo concert tour in China,appearing in Weihai,Qingdao Guangzhou and Changzhou,to a total audience of over 1000 people.

In November 2016 ,she made a Guitar Duo with her College Miguel Angel Diaz(Spain) ,

In August 2017,she invited by the Organiser of Valerio Indonesia International Guitar Competition as an Artist to make concert and Masterclass during the Festival

In March 2018,she invited by the government of Geldern and Goch in Germany as an artist performed Solo Concert in the Spring Series Music Festival.

In December 2018 ,she invited by Martinez Guitar company for making solo concerts through 8 cities in China .(Shenzhen,Suzhou,Xuzhou,Hangzhou,Xiangyang,Wuwei,Tianshui,Rizhao)